It’s probably no surprise to you that churches use a variety of accompaniments when singing choral music. I remember, in the not too distant past, when most churches either used tracks or piano and/or organ every Sunday to accompany the choir. Yes, there were always the large churches in metropolitan areas that used orchestras every week due to their proximity of available and capable players, but certainly not common. Other churches of some size and proximity to metro areas would often hire orchestras for their seasonal works. The variety has continued, and even expanded, according to a recent data I collected from full-time ministers of music in Georgia. Here’s are the reported methods of accompaniment used on CHORAL pieces for every Sunday use: 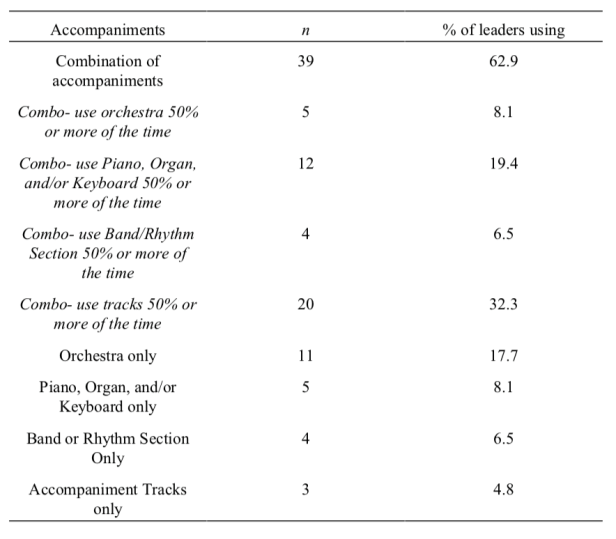 You’ll notice that over 60 percent of those I interviewed used some form of combination each week (note that the numbers and percentages don’t necessarily match because some leaders could fit into more than one of the sub-categories). I broke down further underneath that heading those combinations using an accompaniment choice at or more than 50 percent of the time. Moving down the chart, you’ll see that less than 20 percent use orchestra every week. Less than 10 percent use some sort of “keyboard only” scenario, band, or tracks only. It is truly a cornucopia of possibilities and I didn’t even include any combinations that might have included less than 50 percent. The list is LONG!

What I discovered in this process through data comparison with church size was that the size of the church (and choir) directly related to the accompaniments used. Surprised? I wasn’t. Here are some interesting facts:

This data supports the idea that more “live” accompaniments were found as the church body was larger (with its greater possibilities of having resources and talent to play). Conversely, more pre-recorded music and combinations of accompaniments were found in smaller churches (choirs averaging fewer than 50).  No significant data supported the idea that education of the leader, age of leader or choir members, or even music sung (literature or type) had any bearing on what types of accompaniment were used. Basically, those who CAN play live, do. Those who CAN’T every week (for a myriad of reasons), don’t. I doubt there are many music ministers who wouldn’t want a full orchestra every week if they could!

If your goal is, like mine, to utilize as many people that have talents and calling of the Lord in worship and music ministry, then hopefully you will consider doing all you can to find ways to use live music for choir literature no matter the size of your church or choir. Even if it’s in a combination with another accompaniment type, having the freedom and flexibility to do things live makes a huge difference. There is something odd to me about having band driven congregational song and then blasting a pre-recorded choir track that screams artificial to me, but a LARGE number of churches do just that. Please hear me, I’m NOT condemning or shaming those you who use tracks…I certainly have had to over the course of my ministry, but I always felt the goal was to push towards more live accompaniments for the choir songs just as I was using a band/instruments for congregational singing.

So, if you’ve got a rhythm section that can handle congregational song, then use them for the choir anthem whenever possible. If you have some horn players, add them to that mix. Yes, it means more rehearsal time, but I think it will strengthen the overall impact of the choir ministry in the life of the church.

“Intergenerational Worship” is worship in which people of every age are understood to be equally important.